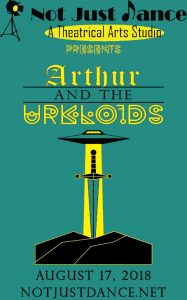 Aliens in the Castle returns for a 5th year of fun!!!

Aliens in the Castle is a “series” created exclusively for Not Just Dance. Students love playing aliens and they also love princes, princesses and everything related to castles. We decided – why not combine the two. Each script is written exclusively for this program and uses the theme “Aliens in the Castle”. These fun shows allow all students an opportunity to shine! We are able to write in additional parts and add (or subtract) lines to give each student a chance to have a part that fits their current skill level.

9 am – 3 pm daily (Extended day available. See below. Contact us to register.) 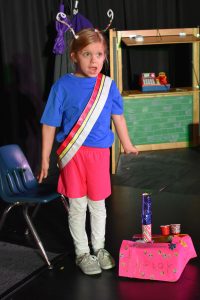 Each student will be required to provide black jazz shoes, black leggings, a black short sleeve shirt on the first day of camp (Additional pieces may be needed depending on the show). 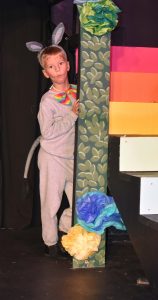 Minatanda – A crafty saleswoman and storyteller with a silver tongue.

Seritub – A squire with the heart of a lion.

Euwynd – A bookist kid with a knack for leadership.

Kint – an advisor on Pollymorg’s Council

Glint – An advisor on Pollymorg’s Council

Flint – An advisor on Pollymorg’s Council.

Popped Corn Seller – A concession seller for the Feudal Feud

Kool Breeze Seller – A concession seller for the Feudal Feud

Young Minatanda – Minatanda as a kid, just as slick of a seller as her older version.

Gerdow – the host of the Feudal Feud

Euwynd. The Strong the Mighty!

In Euwynd The Strong. The Mighty. we meet a grandmother, Minatanda and her two grandchildren. The three are working at selling fake furs at a marketplace on the planet of Togbord, in the capital of Inita, called Leocrux. To help pass the time, Minatanda tells the children an old story about a king named Pollymorg who devises a plan to step down as king. He plans a contest to test witts and pass along the baton to a new alien to take over the kingdom. That’s when we meet Euwynd, a bookish kid with a knack for leadership. Will Euwynd end up taking over the kingdom? Join us this summer to learn his fate and meet a cast of characters that include a squire named Seritub; Euwynd’s Aunt (Teragal) and Uncle (Olofort) and cousin (Rallinor) and Rallinors pet oxlad named Oxie; along with several advisors to the king (Kint, Glint, Flint); a game show host (Gerdow) and Gerdow’s assistant Beatrude and other vendors in the market.