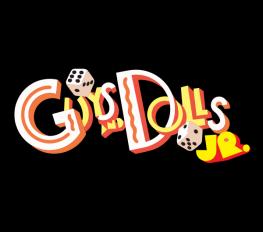 Guys and Dolls JR. is an adaptation of the show considered by many to be the perfect musical comedy. Its namesake ran for 1,200 performances when it opened on Broadway in 1950, and won numerous Tony Awards, including Best Musical. Frank Loesser’s brassy, immortal score and witty book makes Guys and Dolls JR. a perennial crowd pleaser.

Set in Damon Runyon’s New York City, Guys and Dolls JR. follows gambler, Nathan Detroit, as he tries to find the cash to set up the biggest crap game in town while the authorities breathe down his neck. Meanwhile, his girlfriend and nightclub performer, Adelaide, laments that they’ve been engaged for fourteen years without ever getting married. Nathan turns to fellow gambler, Sky Masterson, for the dough, but Sky ends up chasing the straight-laced missionary, Sarah Brown. Guys and Dolls JR. takes us from the heart of Times Square to the cafes of Havana, but everyone eventually ends up right where they belong.

Please refer to the information above pertaining to total cost.

Those registering by April 1st can attend the intermediate audition class for 1/2 price.

Auditions are required.  All students who register will receive a part, regardless of the audition.  The auditions are to help us determine which parts match best to which students.  Please see the Auditions page for all of the details.

There will be a Dance Call at auditions – bring jazz shoes & tap shoes (for tappers).  If you are a tapper please let us know on your audition form. All students will learn a dance. We “may” decide to also have students learn a tap number at auditions as well. Please be prepared in case we decide to do that.

REGISTER FOR AN AUDITION!

Note:  The Not Just Dance staff will process the payments for you automatically, using the credit card you entered when registering. Full payment will be due at time of registration if registration is after April 1, 2022. If you would like pay in full, you have option on the parent portal.