Singin’ In The Rain

Tap your toes and sing along in this splashy adaptation of the world’s most celebrated movie musical. 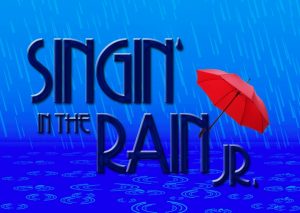 The “Greatest Movie Musical of All Time” is faithfully and lovingly adapted by Broadway legends Betty Comden and Adolph Green, from their original award-

Singin’ in the Rain JR. has all the makings of a Tinseltown tabloid headline — the starlet, the leading man and a love affair that could change lives and make or break careers! In silent movies, Don Lockwood and Lina Lamont are a hot item, but behind the scenes, things aren’t always as they appear on the big screen! Meanwhile, Lina’s squeaky voice might be the end of her career in “talking pictures” without the help of a talented young actress to do the talking and singing for her.

Those registering by April 9th can attend the beginner audition class free of charge.

Note:  The Not Just Dance staff will process the payments for you automatically, using the credit card you entered when registering. Full payment will be due at time of registration if registration is after April 1, 2021. If you would like pay in full, you have option on the parent portal.

Reporter, Dora Bailey, stands in front of the Grauman’s Chinese Theatre, covering the debut of The Royal Rascal, the latest Monumental Pictures silent film. The stars of the film, Don Lockwood and Lina Lamont, greet their fans. When joined by Don’s old vaudeville partner, Cosmo Brown, Dora begs both of them to perform for the crowd (“Fit as a Fiddle”). Lina is frustrated and storms offstage, followed by her agent, Roz. RF Simpson, the movie’s producer, congratulates everyone on a job well done. Lina is upset that Don and Cosmo have stolen her spotlight at the opening, but everyone is in agreement that she shouldn’t speak to the press — her high-pitched, nasal voice is too much of a contrast with her starlet image. She refers to Don as her fiancé, but he tells her there’s nothing between them. Don decides to walk to the party and get some fresh air, sending Cosmo to his car as a decoy to distract the swarming fans. On his walk, Don is spotted by Fan #1 and Fan #2, but convinces them that he’s a regular guy by claiming he’s waiting for the trolley with his girl, Kathy Selden. He puts his arm around her, and she demands to know who he is. He looks familiar… and she’s suddenly convinced he’s a criminal. A Policeman recognizes him and reveals to Kathy that he’s  Don Lockwood, the famous actor. Kathy, an actress herself, is unimpressed, claiming that the stage is a much more dignified art form. Before they can argue any further, Don is recognized by Pedestrian #1 and Pedestrian #2 and runs off.

At Simpson’s party, the Stars and Party Guests are milling around, and a Young Lady sits on Cosmo’s lap. He offers to get her into the movies — by literally taking her to a movie theater — and she storms off. After his conversation with Kathy, Don asks for reassurance from Cosmo  that he’s still a good actor. Simpson jokes about talking pictures but Dexter, director of The Royal Rascal, thinks they’ll never amount to anything. Meanwhile, Simpson has ordered a special cake for Don and Lina. Kathy and Kathy’s Girls jump out of the cake and perform (“All I Do Is Dream  of You”). Don teases Kathy about their earlier conversation, and Kathy angrily throws a pie at him… but it accidentally hits a furious Lina.

Dora Bailey announces Warner Brothers’ first talkie film, The Jazz Singer, is a smash hit and Monumental Pictures will retaliate with The Dueling Cavalier. Don reveals to Cosmo that he is still thinking about Kathy as Stagehand #1 and Stagehand #2 set lights. Cosmo, Stagehand #3, Stagehands, Chorus Girl #1, Chorus Girl #2, Chorus Girl #3, Chorus Girl #4 and other Chorus Girls try to cheer Don up (“Make ’Em Laugh”). The mood changes abruptly with the entrance of Dexter and the 1st Assistant, 2nd Assistant, and 3rd Assistant. Lina arrives on set in a beautiful 18th century costume, revealing to Don that she got Kathy fired. Simpson quickly interrupts with the announcement that The Dueling Cavalier is  to become a talking picture. Unexpectedly, Kathy enters, urged by Dexter to audition for Simpson (“Lucky Star”). Kathy immediately confesses to Simpson that she hit Lina with the pie, thinking Don is trying to beat her to the punch. Instead, Don convinces Simpson to hire her, and Cosmo reveals that they’ve been looking for her for weeks. Don dramatically adjusts the soundstage to reveal his feelings for Kathy (“You Were Meant for Me”).

Later, Dora Bailey’s reports on the first screening of The Dueling Cavalier are lackluster at best — the audience doesn’t like the movie, including Screening Guests #1 through #5. Don, Cosmo and Kathy gather at Don’s house, depressed at the dismal responses to the film. Kathy suggests they make The Dueling Cavalier into a musical, and the three stay up all night scheming (“Good Morning”). They decide to dub Kathy’s voice over Lina’s voice. Don walks Kathy home in the early morning thunderstorm (“Singin’ in the Rain”), handing his umbrella to a Passerby as the scene transitions to a recording stage. Sam, a sound engineer, syncs Kathy’s voice to Lina’s movements (“Lina’s Film Would You,” “Kathy’s Film Would You”). Suddenly, Lina and Zelda storm onto the set. Lina is furious about Kathy’s involvement and vents to Zelda in her dressing room (“What’s Wrong with Me”).

Simpson, Cosmo and Dexter brainstorm about the big production number in the film (“Broadway Melody”). The Broadway Melody Host, Broadway Dancer #1, Broadway Dancer #2, and the Broadway Chorus dazzle. The picture is a huge hit, and Lina decides that Kathy should continue to sing and speak for her. Roz agrees, and Kathy is trapped — she signed a five-year contract. Lina gives a speech to her fans, and Audience Member #1 and Audience Member #2 demand that she sing. Simpson and Roz force Kathy to sing in the microphone behind the curtain, and the Orchestra Leader cues up for the song (“Lina’s Would You”). Simpson, Don and Cosmo raise the curtain so the audience can clearly see Kathy singing for Lina. Don introduces Kathy to the audience as the real star of the show (“Lucky Star – Reprise”).